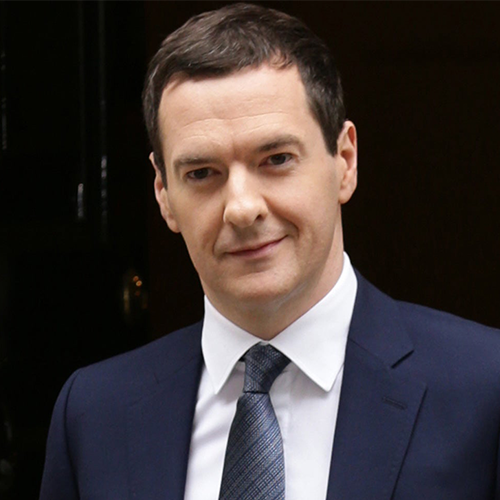 George Gideon Oliver Osborne CH is a British newspaper editor and former Conservative Party politician, who was Member of Parliament (MP) for Tatton from June 2001 until he stood down on 3 May 2017. He served as Chancellor of the Exchequer under Prime Minister David Cameron from 2010 to 2016. He has been editor of the London Evening Standard since May 2017 and chair of the Northern Powerhouse Partnership (NPP) since September 2016.

Osborne worked briefly as a freelancer for The Daily Telegraph before joining the Conservative Research Department in 1994 and becoming head of its political section. He went on to be a special adviser to Douglas Hogg, the Minister of Agriculture, Fisheries and Food, and worked as well as for Prime Minister John Major's campaign team in the party's unsuccessful 1997 general election campaign, before becoming a speechwriter and political secretary to Major's successor as party leader, William Hague.

Osborne was elected as MP for Tatton in 2001, becoming the youngest Conservative member of the House of Commons. He was appointed Shadow Chief Secretary to the Treasury by Conservative leader Michael Howard in 2004. The following year he ran David Cameron's successful party leadership campaign. Cameron then appointed him Shadow Chancellor of the Exchequer and, after the 2010 general election, Chancellor of the Exchequer in the Conservative–Liberal Democrat coalition government. He served as Cameron's de-facto Deputy Leader of the Conservative Party in opposition and in government alongside William Hague, and continued in this role following the latter's retirement from the House of Commons in the 2015 Election.

As Chancellor, Osborne aimed at reducing the budget deficit and launched the Northern Powerhouse initiative. After the Conservatives won an overall majority in the 2015 general election, Cameron reappointed him Chancellor in his second government and gave him the additional title of First Secretary of State. During the premiership of David Cameron, George Osborne was widely viewed as a potential future Leader of the Conservative Party.

He became editor of the Evening Standard in May 2017 and stepped down as an MP at the 2017 general election.