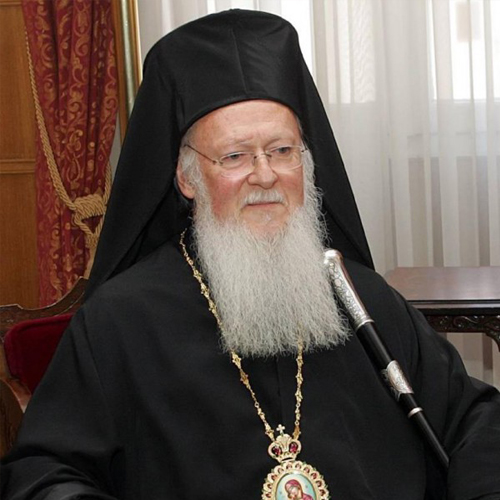 His All-Holiness Archbishop of Constantinople

His All-Holiness, BARTHOLOMEW, Archbishop of Constantinople, New Rome and Ecumenical Patriarch is the 270th successor of the 2,000 year-old local Christian Church founded by St. Andrew the Apostle. As a citizen of Turkey, Ecumenical Patriarch Bartholomew’s personal experience provides him a unique perspective on the continuing dialogue among the Christian, Islamic and Jewish worlds.

He works to advance reconciliation among Catholic, Muslim and Orthodox communities, such as in former Yugoslavia, and is supportive of peace building measures to defuse global conflict in the region. As Archbishop of Constantinople and New Rome, Ecumenical Patriarch Bartholomew occupies the First Throne of the Orthodox Christian Church and presides in a fraternal spirit among all the Orthodox Primates. The Ecumenical Patriarch has the historical and theological responsibility to initiate and coordinate actions among the Churches of Alexandria, Antioch, Jerusalem, Russia, Serbia, Romania, Bulgaria, Georgia, Cyprus, Greece, Poland, Albania, The Czech Land and Slovakia, Finland, Estonia, and numerous archdioceses in the old and new worlds. This includes the convening of councils or meetings, facilitating inter-church and inter-faith dialogues and serving as the primary expresser of Church unity as a whole. As Ecumenical Patriarch he transcends every national and ethnic group on a global level and today is the spiritual leader of approximately 250 million faithful world-wide. Ecumenical Patriarch Bartholomew’s roles as the primary spiritual leader of the Orthodox Christian world and a transnational figure of global significance continue to become more vital each day. He co-sponsored the Peace and Tolerance Conferences in Istanbul (1994 and 2006) bringing together Christians, Muslims and Jews. Most noted are his efforts in environmental awareness, which have earned him the title “Green Patriarch”. He has organized environmental educational seminars in co-sponsorship with His Royal Highness Prince Philip, and international, scientific environmental symposia on Patmos (1995) and around the Black Sea (1997), along the Danube River (1999), on the Adriatic Sea (2002), in the Baltic Sea (2003), on the Amazon River (2006), in the Arctic 2007), and on the Mississippi River (2009). These endeavours, together with his inspiring efforts on behalf of religious freedom and human rights, rank Ecumenical Patriarch Bartholomew among the world’s foremost apostles of love, peace and reconciliation for humanity, a reason for which he was awarded the Congressional Gold Medal by the U.S. Congress.