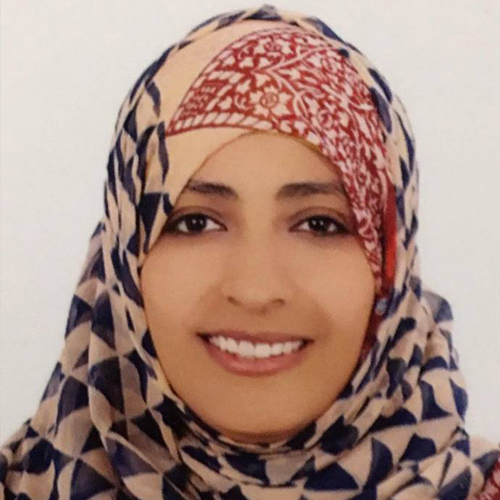 Tawakkol Karman was awarded the Nobel Peace Prize in 2011 in recognition of her work in non-violent struggle for the expression rights, safety of women and for women’s rights to full participation in peace-building work in Yemen.

Upon being awarded the prize, Tawakkol became the first Yemeni, the first Arab woman, and the second Muslim woman to win a Nobel Peace Prize, as well as the youngest Nobel Peace Laureate to date, at the age of 32.

Karman is a mother of three as well as a human rights activist, journalist, politician,president of Women Journalists without Chains organization. She is a General Coordinator of peaceful youth revolution council and She is a member of the advisory board for the Transparency International organisation and for several international Human rights NGOs.

Bold and outspoken, Karman has been imprisoned on a number of occasions for her pro-democracy, pro-human rights protests. Amongst Yemen’s Youth movement, she is known as “mother of the revolution”, “the iron woman”, and recently (The lady of the Arab spring).

Growing up in a politically tumultuous country, Tawakkol witnessed the unification of North and South Yemen in 1990, followed by a civil war between the two factions in 1994 in which the North triumphed over the South. The civil war led to dissidence in the South as the repressive Northern government assumed control over the country.

A journalist by profession and human rights activist by nature, Tawakkol responded to the political instability and human rights abuses in Yemen by mobilizing others and reporting on injustices. In 2005, Karman founded the organization “Women Journalists Without Chains,” (WJWC) which advocates for rights and freedoms and provides media skills to journalists.

In 2007, Karman began organizing weekly protests in Yemen’s capitol, Sana’a, targeting systemic government repression and calling for inquiries into corruption and other forms of social and legal injustice. Tawakkol’s weekly protests continued until 2011, when she redirected protesters to support the Arab Spring. Karman even brought Yemen’s revolution to New York organizing rallies at the UN headquarters.

She has entered into many dialogues and written several articles, calling for abandonment of extremism, violence and terrorism, for the dialogues between religions, sects and for co-existence between the peoples, cultures and civilizations.

She has been arrested for several times; the most notable arrest was on January 22, 2011when she was arrested in the late night and sent to the prison of women, accusing her of the crackdown of the regime and the republic, of the disturbance of Yemen's peace and social security. She has been released from the prison after very big protests in most of Yemen governorates along with a wide international solidarity with her and this forced the regime of Ali Abdullah Saleh to release her from the prison.

Her home was exposed to raids and damage. She has exposed to several attempts of killing; the most notable was woman's attempt to stab her from the back but she was saved by her supporters who could hold that woman.

She along with her children has been threatened with killing and death, most notably when the president Ali Abdullah Saleh contacted with her brother to threaten her brother with killing whoever goes out of his obedience. She has exposed for years to very big campaigns of defamation and ongoing instigation. She always repeats that the death comes only once and that if it comes while you are defending a cause or making a change for the better than if it comes while you do not have any or you are asleep on the bed. She always repeats "we do not fear of the future but we make it"

With her faith in peaceful struggle and her leadership in the peaceful protest movement years before the Arab Spring, Tawakkol Karman could make a political, social, cultural change in Yemen, not to mention that she could fall the president Ali Abdullah Saleh who stepped down from the power on …..

She could convince the Yemeni people who possess more than 70 million pieces of weapons of the necessity to abandon using the arms and to going into a peaceful revolutions holding roses and armed with roses instead.

As a woman, she could convince the Yemeni society, which is a conservative one, with the ability of a woman to be a leader and a decision maker by her practicing and continuing in the leadership of the protesting movements. After years of her insistence on daily and weekly sit-ins and protests  along with activist of her organization Journalists With No Chains alone and a handful of activists of civil issues and human rights, millions of women have gone out to the street to demand of  human rights, fight corruption and demand the fall of the corruptive regime. She said that I was certain that our voices will reach to every home and the time would come as they ever keep laughing at us. It is time for the Yemeni woman to lead the society and to save, along with the man, Yemen. This day has come. We are overcoming gall the false traditions and conventions in parallel to our victory over the dictator.

She has obtained several titles and prizes; notably as follows:

Since receiving the award, Karman has continued to support female journalists and rally Yemenis against government corruption and injustice. Fiercely committed to change, Karman spends the majority of her time in a tent in Change square, where she continues her peaceful protests for justice and freedom.

She strongly calls for the equal citizenship not only in her country but on the world level. She defines herself as "I am a universal citizen, the earth is my home land and humanity is my nation"