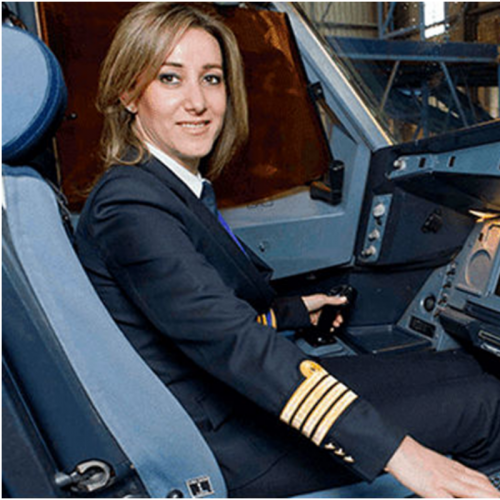 Rola Hoteit is an Airline Captain working for Middle East Airlines. She flies currently Airbus 320 and Airbus 321. Until today, she is the first and only female captain in Lebanon.

She is also the Regional Vice President in the Middle East region for IFALPA (International Federation of Airline Pilots Associations). The first female worldwide to win the elections and get this title. She is also a fellow at the Royal Aeronautical Society, UK. Hoteit has been chosen as one of the top 100 women worldwide by BBC for the year 2016 and has been selected as one of the top 100 influential Lebanese figures in the world. Hoteit holds a BS in Mathematics from the American University in Beirut (AUB), an Airline Transport Pilot’s License from Perth, Scotland, UK, and Aviation Psychology from the University of Graz, Austria. She is currently enrolled in Masters in Philosophy at AUB. She also plans to attain a PhD in Philosophy of Science, operates an MEA flight with a full Lebanese female crew on board, and opens a small book shop.

Hoteit is also a mother of two lovely boys.