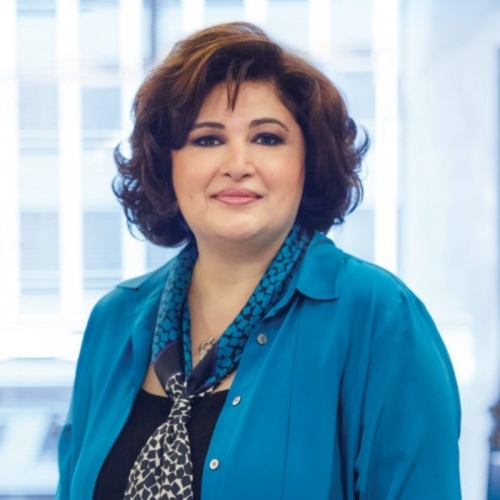 Rana Ghandour Salhab is the Talent and Communications partner and member of the Regional Executive Committee at Deloitte in the Middle East. She also previously served as an elected member of its Board of Directors.

She has over 25 years’ experience in strategy, human resources management, corporate brand positioning, corporate responsibility, diversity and communications leadership. Her previous roles before joining Deloitte included HR director of the Growing Economies region (Russia, CIS, Central Europe, Balkans & ME), and director in the EMEIA (Europe, Middle East, India & Africa) regional management team at Andersen, based in Switzerland. Rana also lived and worked in Saudi Arabia, Egypt and other ME countries.

Rana is an advocate of economic empowerment, political participation and advancement of women to leadership roles in Middle East communities. She also serves on the advisory boards of multiple organizations in the Middle East such asReach, a non-profit organization incorporated in the Dubai International Financial Center (DIFC) with chapters across the region, designed for mentoring and supporting women in Finance; and supports the 30% Club – GCC, an initiative that aims at increasing the number of women on corporate boards in the GCC countries. Rana is a member on the Executive Board of the National Commission for Lebanese Women (NCLW), which advises ministries in Lebanon on gender equality laws and practice; and sits on the Middle East Advisory Board (MEAB) of the Olayan Business School at the American University of Beirut (AUB).

In2017 and 2018, Rana was ranked amongst the top “Global Champions of Women in Business” lists by the Financial Times and HERoes in the UK.