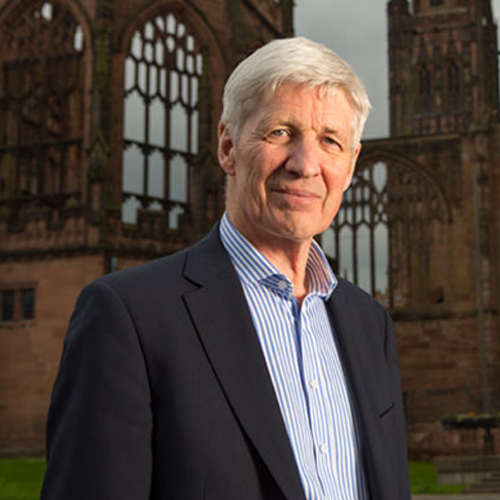 Professor Mike Hardy is Chair of Intercultural Relations and a founding Director of the Centre for Trust, Peace, and Social Relations at Coventry University.

In his early career, Mike was trained as an economist and led economics departments at both Leeds and Central Lancashire Universities; he was a Fulbright Scholar in the USA. From 1995 until 2011, initially seconded to UK Government as a senior adviser, Mike was a senior manager with the British Council with responsibilities, among others, for the Council’s global cultural relations programme for intercultural and interfaith dialogue, youth engagement and so-called ‘soft-power’ global strategic partnerships; his diplomatic work with British Council included overseas postings, in Egypt, East Jerusalem and Indonesia.

He returned to academic life in 2011 as Professor of Intercultural Relations at Coventry University. Mike is active with UNESCO and the UN Alliance of Civilizations; he is currently lead advisor to the World Forum for Intercultural Dialogue in Baku, the World Peace Forum in Indonesia and directs the RISING Global Peace Forum at Coventry. His Centre at Coventry will host the Academic Council of the United Nations System (ACUNS) from 2018.

Professor Hardy has been twice honoured, awarded the OBE in 2001 for his peace-building work in the Middle East, and appointed a Companion of Honour of St Michael and St George (CMG) in the Queen’s Birthday Honours, June 2010, for his work internationally in Intercultural Dialogue. Mike is a trustee of 3FF the leading interfaith charity in the UK and a board director of the US-based International Leadership Association.

His published work reflects his interest in identity: Future: Next Exit (2009) and Future Agenda- the World in 2020 (2010), in innovation and vulnerability: Inclusive Innovation for Sustainable Development (2016). London: Palgrave, and in intercultural dialogue: Dialogue, Conflict and Transformation: Concepts and Context (2017) MUP/UNESCO.