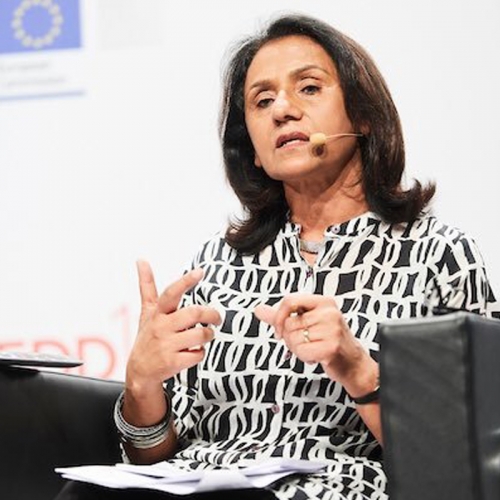 Parminder Vir is the Chief Executive Officer of the Tony Elumelu Foundation (TEF). As CEO, she manages the overall day-to-day strategic development of TEF and its mission of empowering African entrepreneurs, and ensuring that entrepreneurship becomes the primary driver of Africa’s economic growth and social transformation.

She joined the Foundation as the Director of Entrepreneurship in April 2014, and was responsible for the design of the $100 million, multi-year, pan-African Tony Elumelu Entrepreneurship Programme (TEEP).

TEEP is an annual accelerator programme of training, funding, and mentoring, designed to empower the next generation of African entrepreneurs.

She has had a 20-year award-winning career as film and TV producer with BBC Television, Carlton Television and Chanel Four, as well as CEO of her independent production company, Formation Films. She served as a Board Director of several private and public sector boards including the UKTI Asia Task Force and the UK India Business Council.

Ms. Vir was awarded an Order of the British Empire (OBE) by Queen Elizabeth II for her services to the Broadcasting and Film industry in 2002.