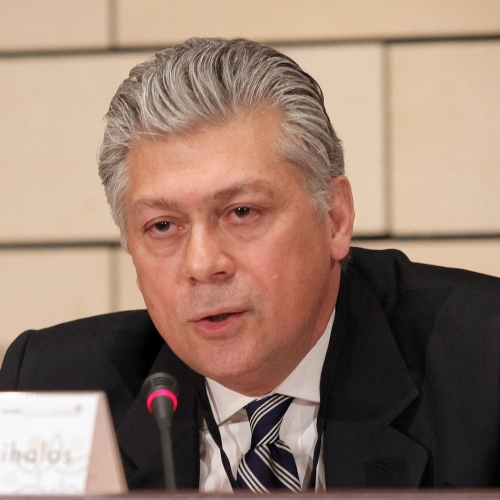 Panagiotis Mihalos has broad and extensive experience in the business, investment and political arenas, united by one common objective: promoting economic growth, national development, business partnerships and investment, both in Greece and the greater region of Southeast Europe and the Middle East.

Following his studies in Mathematics and Economics (B.Sc.), then Finance and Business Administration (MBA) at the City University of New York, he began his professional career in Finance and Marketing in the United States, spending 10 years with J. E. Seagram & Sons Inc. in New York. In 2007 Mr. Mihalos was elected President of the Hellenic Entrepreneurs Association (EENE), of which he remains Honorary President, playing a pivotal role in the institutional development and international networking of the Greek entrepreneurial community. In 2012 he was appointed, by Prime Minister Samaras, Secretary General for International Economic Affairs at the Ministry of Foreign Affairs, where he led global efforts to upgrade Economic Diplomacy for Greece. At the Ministry, he was responsible for the promotion of international trade and the attraction of investment to Greece.