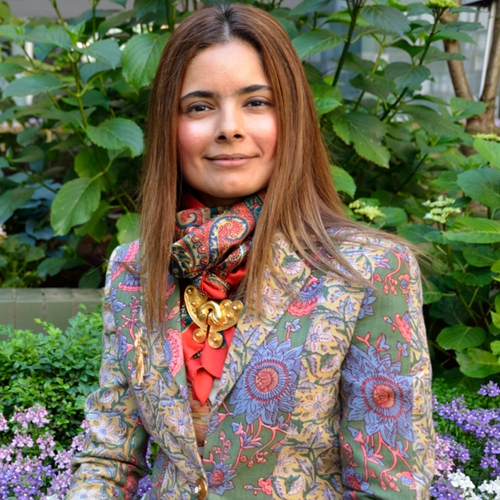 Neishaa Gharat is the designer and founder of House Of Gharats (https://www.houseofgharats.com), a London based design house that creates fashion and lifestyle collections for artful dressing and living. She has made it her mission to change the world one scarf at a time.

Before moving to London she co-founded and pioneered one of the largest design studios in Mumbai India, working with International brands. Her designs tell a story of interweaving of cultures, social changes which is a juxtaposition between tradition and modernity. Her design process is a fascinating intersection of design, culture, craft and technology that wants to be a part of a new future.

Neishaa and her husband, Pretam Gharat were listed among the Top 100 Asian Power Couples in the UK. In 2014 Neishaa Gharat received the Global Indian Excellence Award in 2014 from Lord Swaraj Paul and Abhimanyu Ghosh, Chairman WCRC. In 2015, Neishaa Gharat was shortlisted for the Asian Women of Achievement Award for Arts & Culture.

She practices within the realms of  textile arts, crafts and fashion, creating conscious luxury for a global eclectic clientele. She believes in bringing together style, substance and sustainability to empower. She is driven by the values of art and craft in contemporary design and as a result, her designs are timeless pieces that can be passed down through generations. The leading magazine Architectural Digest featured Neishaa’s fearless take on Indian Textiles. She was featured as one of the leading UK based designers in India Today magazine.

Neishaa was appointed for a prestigious project by the Government of West Bengal in London for Biswa Bangla. An initiative that reaches out to thousands of craftspersons and weavers in the state. Their ‘social business’ approach is creating entrepreneurs out of artists, and bringing back economic self-reliance to the bottom of the pyramid. This helps sustain the traditional art and craft of the state by creating viable livelihood opportunities.

Her collaboration with The Big Issue Shop has given her designs a voice to reckon with. She has set herself on a mission to ‘Change the world one scarf at a time’. Her empowering scarf designs are sought after by celebrities as well as women and men with a powerful voice & individual style alike. Her scarf designs are not only a style statement but empower both the one wearing it and the cause it is supporting.

She is a voice & advocate of style and is often photographed and featured in London Fashion Week street style diaries (https://www.shutterstock.com/it/editorial/image-editorial/street-style-fall-winter-2019-london-fashion-week-mens-uk-05-jan-2019-10048776f). She regularly volunteers her design skills for charities like Oxfam (https://oxfamapps.org/fashion/2013/08/13/https-www-oxfam-org-uk-fashion-blog-2013-08-neishaa-gharat-interview-london-mela/) and The British Red Cross.

She is often invited to give her comments on fashion, featuring on CNN-News18 UK, BBC Radio London and is regularly featured and interviewed for her work in leading global magazines namely Platform Magazine Unblock Magazine, Wildabout Magazine, Blouin Art Info, She Canada, London Design Festival.