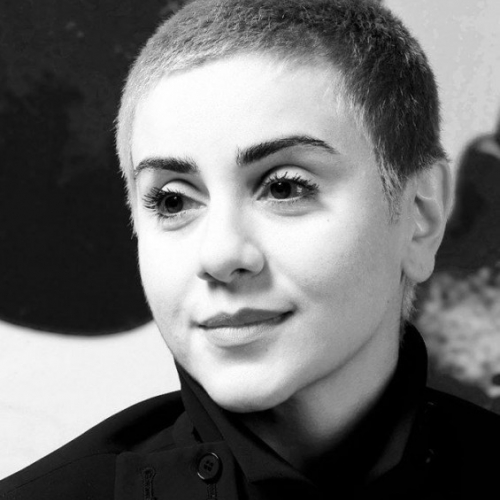 Mania Akbari was born in 1974 in Tehran, Iran. The daughter of schoolteachers, she started painting at a very early age. Later she worked as cinematographer and assistant director on documentaries, which reoriented her towards cinema. Her international breakthrough occurred, however, not as a result of her work behind the camera but in front of it.

Akbari played a version of herself, together with her son Amin Maher and her sister Roya, in Abbas Kiarostami’s 2002 feature Ten, selected for competition at that year’s edition of the Cannes Film Festival. This was followed in 2003 by Crystal, a documentary about a young Kurdish woman who produces crystal stones from various parts of her body, including her eyes, her throat and her vagina. Her debut as sole director was in 2004 with 20 Fingers, which she also wrote and starred in. It was awarded Best Film in the Digital Cinema section at the Venice Film Festival and was screened – and won further awards – at more than 40 film festivals internationally. During the next three years, Akbari made Six Video Art works, which not only screened at numerous film festivals such as Locarno, but were also exhibited at museums such as Tate Modern in London. In 2007, Akbari was diagnosed with breast cancer. The experience of successfully battling the disease prompted her to direct and act in her second fictionalized documentary, 10+4, a sequel to Abbas Kiarostami’s Ten made four years earlier. The new film was exhibited at numerous festivals such as San Sebastián and Cannes, and received numerous awards including Nantes Special Public Award Best Film and Best Director at Kerala Film Festival. Akbari’s meditations on death, war, family, memory, beauty, relationships and above all, identity, have formed the bases not only of her filmed work but also of a series of photo-based exhibitions that took place between 2007 to 2010 – This is Mania-This is not Mania (2007), This is not Mania-This is not Mandana (2008), Van Gogh’s Ear (2008), Devastation (2009), My Family (2009), My Guernica (2009), To Be Mandana, To Be Not Mandana (2009), Happy Marriage, Mania Akbari & Behnoud Shojaee (2010) – and which toured around the world to countries as various as Switzerland, Slovenia, Brasil, Spain, Italy, UK, France, Dubai and the US. Since her move to London, various international retrospectives of Akbari’s films has drawn attention to her cinema, among which retrospectives at the BFI, Oldenburg International Film Festival and the Danish Film Institute , Cyprus Film Festival are the and most notable.