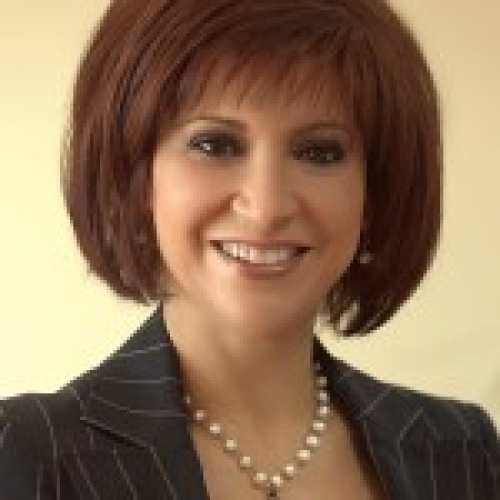 Mrs. Majd Shweikeh is the CEO of VTEL Holdings since 1st July 2010; then in June 2011 she became the Group CEO of VTEL Middle East and Africa Limited. Mrs. Shweikeh was the Vice President of Jordan Telecom Group and CEO Orange Mobile until 31st May 2010.

She had held this position since January 2006. Mrs. Shweikeh is the President of the International Women’s Forum / Jordan Chapter and a member in the Economic and Social Council and She is also at the Board of trustees for Isra’a University and at the Board of Directors for Union Bank. Mrs. Shweikeh is also the Vice Chair of the Friends of Global Fund to fight Aids, Malaria and Tuberculosis, and Board Member in the Young Presidents’ Organization, a board member in the Swiss Jordanian Business Club, Member in Business Professional Women-Amman and Honor Member in the Inner Wheel Club of Amman, and Member in Haya Cultural Center. Prior to assuming the CEO position, she was the Chief Financial Officer and member of the Operating Committee since 2000 for MobileCom ( currently branded Orange Mobile); Finance Manager at DHL, the international carrier service, since 1992; Project Accountant for budgeting and project planning at the American International Contractor Inc. (AICI) from 1988 to 1992; and an Auditor with Arthur Anderson. Mrs. Shweikeh served as a board member at the Social Security Investment unit from 2006 till 2009. Mrs. Majd Shweikeh holds a first class Honors BSc in Finance from Yarmouk University, and she received the Certified Management Accountant certification from the USA in 1999.