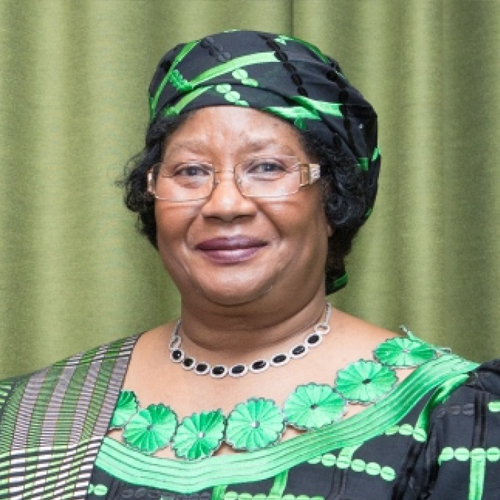 An entrepreneur, activist, politician, and philanthropist, Her Excellency Dr. Joyce Banda was also the President of the Republic of Malawi (2012-2014). She was Malawi’s first female president and Africa’s second.

Voted as Africa’s most powerful woman by Forbes Magazine for two years running and voted as one of the most powerful women in the world, Her Excellency Dr. Joyce Banda is a champion for the rights of women, children, the disabled, and other marginalized groups.

Before becoming President of Malawi, Dr. Banda served as a Member of Parliament; Minister of Gender and Child Welfare; and Foreign Minister and Vice President of the Republic of Malawi. While serving as Minister of Gender and Child Welfare, Dr. Banda championed the enactment of the Prevention of Domestic Violence Bill in 2006, which provides a legal framework for the elimination and prevention of all forms of violence against women and girls.

A recipient of more than 15 international accolades including the “Hunger Project Africa Prize for Leadership for the Sustainable End of Hunger” shared with President Joaquim Chissano of Mozambique in 1997, President Banda is a strong advocate for women and girls’ emancipation and empowerment and a prominent civil rights campaigner. She founded the Joyce Banda Foundation International, which guides projects that range from empowering women to providing for orphans’ education.

On the international scene, President Dr. Banda was instrumental in the formation of such organizations as the African Federation of Women Entrepreneurs (AFWE), currently running in 41 countries in Africa; the Council for the Economic Empowerment of Women in Africa (CEEWA); and the American & African Business Women’s Alliance (AABWA), of which she served as First President.

President Banda sits on a number international organization bodies. These include the Executive Advisory Committee of UNIFEM, the Global Leaders Council for Reproductive Health, and the Scientific Advisory Board for the program in Global Health and Social Change at Harvard Medical School.