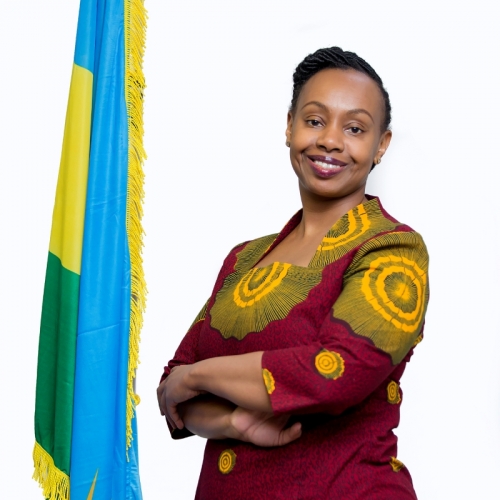 H.E. Yamina Karitanyi is currently the High Commissioner for the Republic of Rwanda to the United Kingdom, and non-resident Ambassador to Ireland since September 2015.

Prior to her posting in London, from April 2014, Amb. Yamina Karitanyi was at the helm of the Tourism and Conservation portfolios at the Rwanda Development Board (RDB), the Government’s agency mandated with fast-tracking economic development in the country. During her tenure as Head of Tourism and Conservation, the Department saw innovative new products enhanced in Tourism, including the re-integration of Lions in Akagera National Parks and Rwanda’s conservation achievements have been highlighted on the global scene.

Having held various senior positions over 10 years at GoodWorks International, a strategic consulting and advisory firm that services multinational corporations and governments, in the USA and East Africa, prior to which she was Marketing Analyst at Carrier Corporation, Ms. Karitanyi has a proven track record in international business, operations management, business negotiations and Diplomacy.

Amb. Yamina Karitanyi holds a Bachelor of Science Degree in Business Studies (1998) from Buffalo State College, USA, and an MBA from Rochester Institute of Technology (2000), USA. She is fluent in English, French, Kinyarwanda and Swahili.