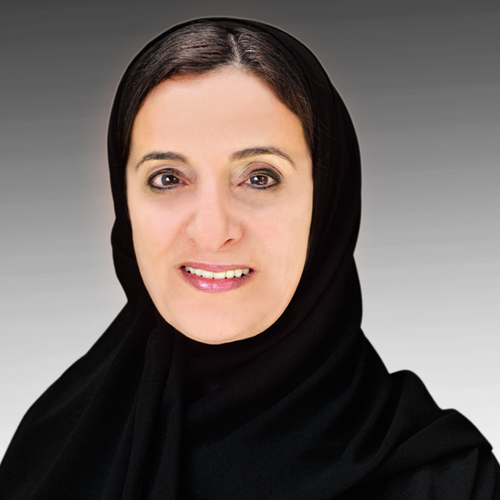 Minister of State for Tolerance, UAE

Minister of State for Tolerance – H.E. Sheikha Lubna Al Qasimi joined the Federal Government in 2004 as Minister of Economy, becoming the first woman to assume a cabinet position in the UAE.

She was later appointed in 2008 as Minister of Foreign Trade, and then in 2013 as Minister of International Cooperation and Development, with the responsibility of boosting the UAE’s role as a major donor and key player in global human development. Besides her ministerial responsibilities, H.E. Sheikha Lubna is also a Board Director at the Emirates Nuclear Energy Corporation, a member of the Governing Board of the Lee Kuan Yew School of Public Policy – National University of Singapore, a member of the Board of Trustees for Thunderbird, The American Graduate School of International Management, Phoenix Arizona, a Board Director at the Emirates Foundation for Youth Development, a member of the Board of Trustees of the Dubai School of Government and Co-Founder and Board Member of the Friends of Cancer Patients. During her two previous posts, the country enjoyed its most economically prosperous period and highest volumes of foreign trade. H.E. has been honored by several countries for her role in enhancing their relations with the UAE. In 2013 Forbes Magazine recognized her as the most powerful Arab woman and the world’s 67th most powerful women. H.E. Sheikha Lubna Al Qasimi obtained a Bachelors Degree in Computer Science from California State University of Chico (CSUChico) in 1981 and an Executive MBA from the American University of Sharjah in 2002. She also has an Honorary Doctorate in Science from California State University at Chico (US), an Honorary Doctorate in Law from the University of Exeter (UK) and an Honorary Doctorate in Economics from the Hankuk University of Foreign Studies (Korea). Sheikha Lubna was born on 9th of January 1958.