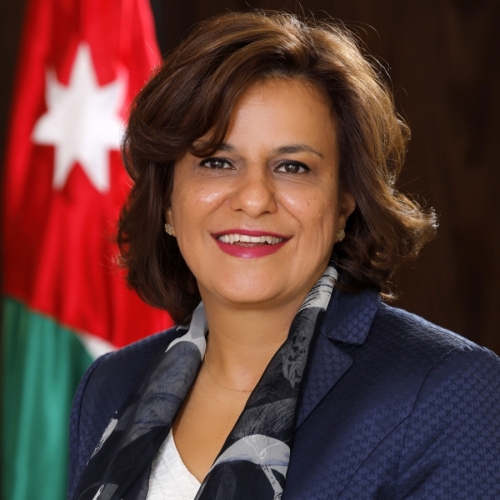 Ms. Saqqaf holds a Master's degree in Economics and has more than 25 years’ experience of banking, finance and financial regulation. Currently, she serves as Chief Executive Officer/ Vice Chairman of the Board of Social Security Investment Fund (SSIF).

Ms. Saqqaf began her career at the Jordan Phosphate Mines Company’s Research& Development Department for five years. She then moved to the Central Bank of Jordan where she held several positions during the periods 1993 – 2004, 2006 -2012 including Executive Manager of the Banking Supervision Department and Deputy Governor of the Central Bank of Jordan; thus being the first Arab Woman to occupy such a regulatory position.

​In addition to the above, Ms. Saqqaf gained quite good experience in the insurance industry as she served as the Director of the Research Department at the Insurance Commission of Jordan during the period 2004-2006. Ms. Saqqaf joined Arab Bank in 2012 as Executive Vice President, Country Manager of Jordan& Palestine then she was appointed as Executive Vice President, Group Risk Management in Nov. 2013 until October 2018 when she joined SSIF.

Ms. Saqqaf served and continues to serve in different capacities on the Boards of the Central Bank of Jordan (Vice Chairman), Jordan Mortgage Refinance Company (Chair), Social Security Corporation, Insurance Commission, Arab National Leasing Company and on the National Committee for Anti-Money Laundering and Counter Terrorist Financing. Moreover, she served as Vice Chairman on the board of the first Jordanian Credit Bureau Company CRIF- Jordan, Ethmar Islamic Microfinance Company, Business Development Centre. She is currently the President of the Board of the International Women's Forum – Jordan Chapter.