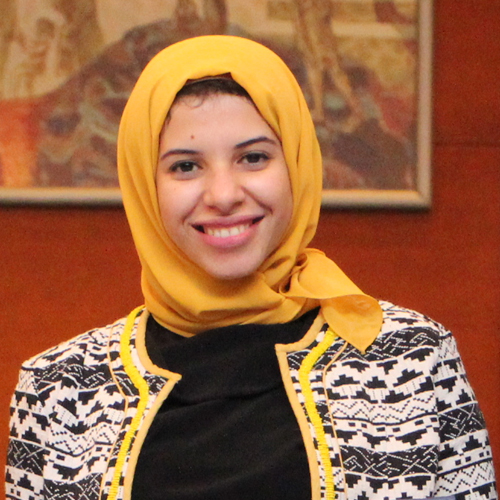 Hajar Ibrahiem is a policy analyst in the “Governance center - Ministry of planning, follow up and administrative reform- Egypt” before that she works as a senior software developer at the private sector for three years.

She holds a Diploma in “System Development and Mobile Applications - Information Technology Institute (ITI)”, she currently works on her Master Degree in Cloud computing technology as she believes that ICT is deeply integrated into achieving sustainability goals.

Hajar is proud to be an Egyptian Red crescent Volunteer, the “ERC” is particularly interested in women and youth empowerment, the economic empowerment of the most vulnerable communities and helping the refugees. She is also a member at the “Emergency action teams” that offer their services during conflicts regarding first aids, psychological support and restoring family links.

Hajar had the chance to travel to Europe, Asia and Africa, she visited many countries as Italy, Switzerland, France, China and Hong Kong. She was nominated to “HUAWEI” Seeds for the Future program to travel to China and experience the Chinese culture and get closer to HUAWEI latest technologies, she also represented the “Egyptian Red Crescent” in many occasions as the international AtlantisX camp in Italy under the name of “Engaged Youth for stronger national societies” where she met amazing youth from all over the Mediterranean countries, and the 32nd International Conference for the Red Cross and Red Crescent National societies in Geneva, she was elected as a youth representative at one of the Egyptian Red Crescent societies in which she proudly worked with the other volunteers on promoting the concept of (Youth as agents of Behavioral Change – YABC).

Hajar was a trainee at the” Presidential Leadership Program (PLP)”, she was a member at the organizing team of the (World Youth Forum) held in Sharm El Sheikh - Egypt 2017, as well as she was one of the speakers at the forum during the (women Empowerment) session, she also participated at the “MUN” during the “WYF” with the attendance of the Egyptian President Al-Sisi, the Egyptian Foreign Affairs Minister Samah Shokri and the French Foreign Affairs Minister Le Drian. She also participated many times at the Egyptian Cabinet Model, Cairo international Model of Arab League, and Cairo international Model of United Nations at the “AUC “ where she had the award of First honourable mention delegate.

Hajar is looking forward to bring a positive social impact to her community, beloved country “Egypt” and all the marginalized and discriminated people all over the world.