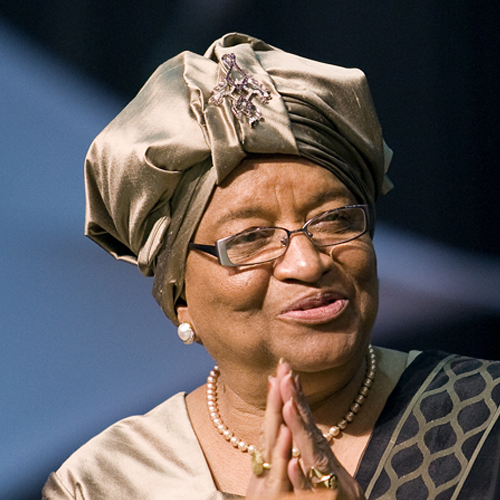 As Africa’s first democratically-elected female head of state, she has led Liberia through reconciliation and recovery following the nation’s decade-long civil war, as well as the Ebola Crisis, winning international acclaim for achieving economic, social, and political change. Recognized as a global leader for women’s empowerment, President Sirleaf was awarded the prestigious Nobel Prize for Peace in 2011. She is the recipient of The Presidential Medal of Freedom—the United States’ highest civilian award—for her personal courage and unwavering commitment to expanding freedom and improving the lives of Africans. Her many honours also include the Grand Croix of the Légion d’Honneur, France’s highest public distinction, and being named one of Forbes’s “100 Most Powerful Women in the World.”

And in 2017, former President Sirleaf was awarded the Mo Ibrahim Prize for Achievement in African Leadership, which celebrates excellence in African leadership. The Ibrahim Prize recognizes leaders who, during their time in office, have developed their countries, strengthened democracy and human rights for the shared benefit of their people, and advanced sustainable development. Sirleaf was the first female recipient.

President Sirleaf was elected President of the Republic of Liberia in 2005, two years after the nation’s bloody civil war ended. Her historic inauguration as Africa’s first democratically elected head of state took place on January 16, 2006. Prior to the election, she had served in the transitional government, where she chaired the Governance Reform Commission and led the country’s anti-corruption reform. She won reelection in November 2011.

During her two terms as president, Johnson Sirleaf has focused on rebuilding the country, attracting over $16 billion in foreign direct investment. She has also attracted more than $5 million in private resources to rebuild schools, clinics and markets, and fund scholarships for capacity building. She successfully negotiated $4.6 billion in external debt forgiveness and the lifting of UN trade sanctions, which have allowed Liberia to once again access international markets. She increased the national budget from $80 million in 2006 to over $672 million in 2012, with an annual GDP growth rate of more than 7%.

In June 2016, President Sirleaf was elected the first female Chairperson of the Economic Community of West African States (ECOWAS) for a twelve-month term. In May 2012, she was appointed co-chair of the United Nations Secretary General’s High-Level Panel of Eminent Persons on the Post-2015 Development Agenda. The panel is tasked with crafting a roadmap for global recovery and sustainable development.

President Sirleaf began her career in the Treasury Department in Liberia in 1965. In 1979, she rose to the position of Minister of Finance and introduced measures to curb the mismanagement of government finances. After the 1980 military coup d’état, she became president of the Liberian Bank for Development and Investment, but fled Liberia that same year, escaping an increasingly suppressive military government. Johnson Sirleaf has also served as vice president of Citicorp’s Africa regional office in Nairobi, as senior loan officer at the World Bank, and as a vice president for Equator Bank.

Prior to her first campaign for the presidency, Johnson Sirleaf served as assistant administrator of the United Nations Development Programme and as director of its Regional Bureau of Africa, with the rank of assistant secretary-general of the United Nations, a post she resigned to contest the 1997 presidential elections. After coming in second, she went into self-imposed exile in neighbouring Cote d’Ivoire (Ivory Coast). While in exile, she established a venture capital vehicle for African entrepreneurs and founded Measuagoon, a Liberian community development NGO.

Born Ellen Eugenia Johnson, President Sirleaf is the granddaughter of a traditional chief of renown in western Liberia and a market woman from the southeast. U.S. educated, she holds a master’s in public administration (MPA) from Harvard University’s Kennedy School of Government. She also earned a degree in accounting at Madison Business College in Wisconsin and received a diploma from the University of Colorado’s Economics Institute.

President Sirleaf has written widely on financial, development and human rights issues, and in 2008 she published her critically acclaimed memoir, This Child Will Be Great.

She is the proud mother of four sons and grandmother of 12.