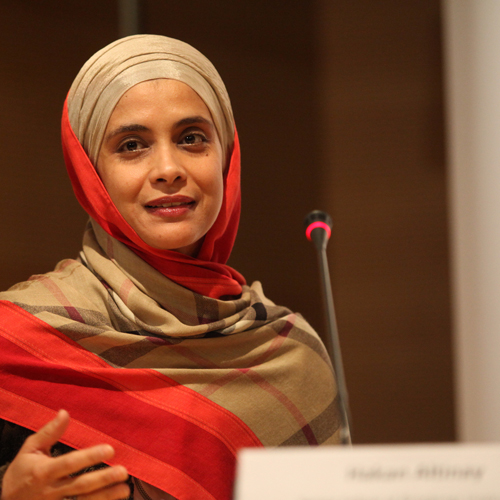 Maisah Sobaihi is an academic, writer, performer and director. She has a doctorate in English Literature from King’s College, the University of London and is an Assistant Professor at King Abul-Aziz University in Jeddah.

She recently became the first Saudi Arabian performer to participate at the Edinburgh Fringe Festival. She is best known for her work in theatre and the arts across the Kingdom of Saudi Arabia and around the world. Her one-woman play entitled ‘Head Over Heels in Saudi Arabia’ was first performed in 2006 in Jeddah, Saudi Arabia, and has been performed several times since then, both within the country and in the US. In 2011, Maisah performed her play at the Midtown International Theater Festival, Manhattan, New York. She aims to perform this play at other venues across the US and Internationally in order to create a stronger dialogue and understanding of Middle Eastern affairs. Maisah is widely respected as a contemporary voice for women leading her to co-host a series on the experiences of Muslim women around the world, as well as serving as a Fulbright scholar at New York University. She has represented Saudi and Arab women at International and regional forums, one of which includes the Arab Youth Survey where she served as a panelist alongside Mark Penn, and Mohammad Al-Abbar to explore aspirations and attitudes of the Middle East youth.