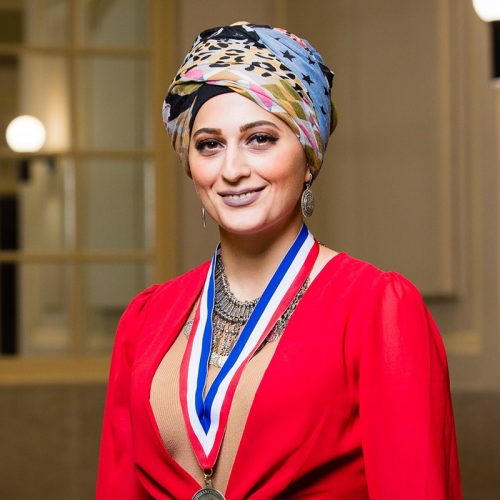 Basma Alawee is a wife, a mother of two, a humanitarian, a Muslim, an engineer, a teacher, a writer and an activist who arrived in the United States in 2010 as a refugee.

Since her arrival, she began her work of rebuilding her own life but quickly realized that she arrived with advantages, not least of which, fluency in English and college education. Moved to action, she began to volunteer for World Relief and Lutheran Social Services, two of the three local resettlement agencies, helping other refugees with translation and with navigating the complex bureaucratic and cultural process of starting a new life in Jacksonville. In short order, this turned into serious advocacy, and Basma was selected to be a delegate of Florida at the UNHCR Refugee Congress in December of 2013. Not content with local and national advocacy, she volunteered to create Arabic-language citizenship and GED classes for a website resource for newly-arrived refugees nationwide was selected to be a board member and then in 2017 elected to be the chair of the board of the Refugee Center Online. In 2019, she co-founded WeaveTales, a nonprofit specializing in collecting and sharing the stories of refugees around the world to humanize their voices and correct misleading narratives surrounding refugees.

In her “spare” time, Basma acted as the secretary of the local Iraqi Family Organization, an ethnic community-based organization set up by World Relief to empower refugees to support their own community until its recent dissolution. She continues to be a member of the immigrant women’s march group and work with the Arab American Institute. In 2018, she left her job as a teacher and accepted a position as a Refugee Organizer for the Florida Immigrant Coalition. As an organizer, she works to lift immigrant voices and advocate for their needs while on her own time she continues to volunteer in and around her community. She also serves on the Board of the South East Immigrant Rights Network and Arab American Community Center. In addition to political campaigns and other advocacy efforts on a state and national level, she has been in close collaboration with various community groups in using storytelling as a method of public education about refugees. Her recent work, a handbook for newly arrived refugees and immigrants, compiled the stories of brave female refugees and immigrants whose survival and leadership can be an inspiration to many other women all over the world and was published in December 2018.

In 2019, Basma’s work also earned her One Jax Humanitarian Award and in 2018, she was selected as one of 10 Empowering Women to be honoured at the Women In Leadership and Empowerment Conference in 2018. Basma aspires to continue pursuing her passions for refugee advocacy through various channels and partnerships.