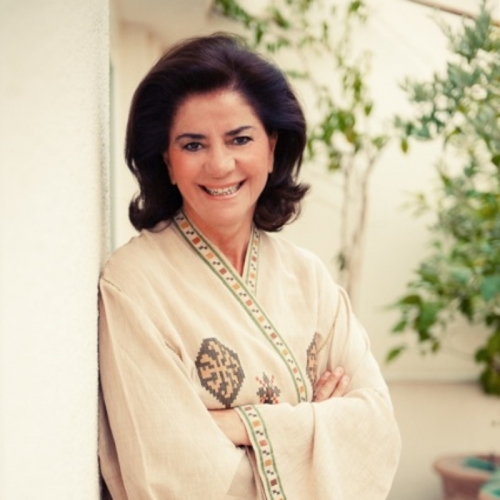 Barbara was born in Aimonas Village of Mylopotamos, Rethymnon. She studied Journalism in Athens and continued in London with studies in Communication. She speaks English and French.

From 1977 to 2000 she had a managerial role in the VardinoyannisCorporation -Communication Division with international activity and presence.

In 2000 she founded a personal company under the name of “Dialogos Communication”, dealing with Communication and promoting ideas.

Her professional qualities have enabled her to combine her everyday life, her love for Crete with her activities which are varied and multicultural.

She has successfully collaborated with famous personalities of Greece's political and economic life.

Through the Conferences and Symposia, which she organizes with great success with the support of her stuff, they highlight the cultural elements of Crete and Greece.

Additionally,  through her collaborations in Europe and the United States of America, she has contributed to the promotion of culture, sports, idealistic ideas, NGO support, as the Promotion - Advertising of typical Crete products, such as tourist businesses, Cretan products (textiles - olive oil), under the most modern and international means of communication.

She undertook the sponsorship of Communication & Marketing, which concerns important institutions which promote and highlight the state of Crete, including the University, the Medical Society of Chania, the Rethymnian Renaissance Festival, the International Congress of the History and Culture of Crete, the Regatta Odyssail and many other important issues of the place.

Her interests include politics, society, environmental protection, history, philosophy, poetry, research of popular and folklore culture in Crete as the care for sensitive social groups, NGOs and sailing.

She is a founding member of the University of the Mountains (UoM).

Μoreover, she is the Inspirator and Coordinator of the “Mission Penelope Gandhi”, the Sacred Art of Weaving in Crete in our days.

She has a daughter, Elena Ioannou and she is married to Professor in Ophthalmology of the University of Crete, IoannisPallikaris.