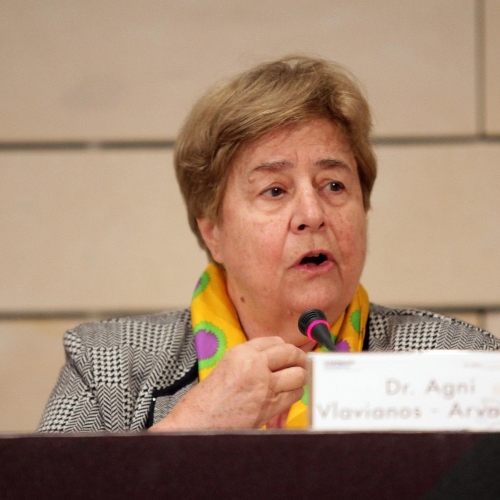 She is also Commissioner on The Global Commission to Fund the United Nations, Founding Member of the Balkan Academy of Sciences, New Culture and Sustainable Development and Co-Founder of the International Science Foundation, Scholarship Trustee for the Hellenic Canadian Association. She has also served as Vice-President of the International Bioethics Society, Honorary President of the Association Members and Coordinator for the Mediterranean Region of the “Life in Space” project, and Vice President of the UNESCO-MAB Hellenic National Committee. She is a graduate of Columbia University’s Barnard College (B.A.), New York University (M.S.) and the University of Athens (Ph.D.) In 1995, she was nominated for the Nobel Peace Prize, a nomination which was renewed several times. In 1985, after having dedicated twenty years to teaching and research in biology, Professor Agni Vlavianos Arvanitis founded the Biopolitics International Organisation (B.I.O.) to promote international cooperation and education for the environment. With Greece as its operating basis, B.I.O. has gained wide acclaim by scholars and decision-makers in 151 countries around the world, and has been granted special Consultative Status with the United Nations’ Economic and Social Council (ECOSOC). Motivated by the feeling that humanity needs to move at a faster pace in order to prevent destruction and in strong belief that our future depends on groundbreaking reforms in education, she launched the International University for the Bio-Environment in 1990. In 1992, she proposed the revival of the ancient ideal of cease-fire during the Olympic Games and the award of Bios Prizes for excellence in environmental protection in all fields. Her proposal for cease-fire during the Olympic Games was adopted as a UN Resolution.