Passionate about making a positive change in her community and in the world, Afaf Assas is a 25 years old Algerian youth activist and trainer. She holds a master degree in information and communication from the University of Algiers. After years of volunteering and civic engagement, Afaf started following her passion for international development by launching two social initiatives: “SDG’s Advocates Community Algeria” and “The ICT4Sustainability“, they both aim to raise awareness and design a strategic plan to achieve the 2030 agenda for sustainable development as well as enhancing the leadership skills of the Algerian youth. Afaf is contributing by conducting workshops in sustainability and projects management for youth. 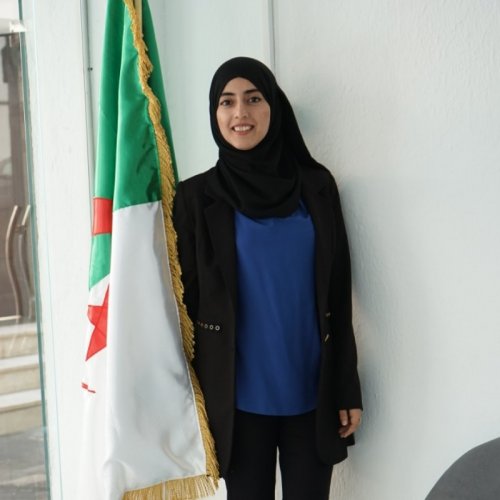 A: The Algerian culture is a unique blend of tradition and outside influence. Over the centuries it has been formed by the influence of three different civilizations: Arab, African, and the Mediterranean. The geographical position of Algeria has facilitated exposure to a variety of cultures and the mixing of several cultures at once, through trade for instance.

Passionate about making a positive change in her community and in the world; Afaf Assas is 25 years old Algerian youth activist and a trainer.

She holds a master degree in information and communication from the University of Algiers 3. She is also an alumna from California State University Chico. After years of volunteering and civic engagement, Afaf started following her passion for international development by launching two social initiatives: “SDG’s Advocates Community Algeria”in (2017) and “ The ICT4Sustainability “ in (2018), they both aim to raise awareness and design a strategic plan to achieve the 2030 agenda for sustainable development as well as enhancing the leadership skills of the Algerian youth.

Afaf is contributing by conducting workshops in sustainability and projects management for youth. Afaf has various experiences in journalism, education and diplomacy fields, she is an SDGs advocate and a human rights activist, Afaf has represented Algeria in regional and international forums and conferences including: The OHCHR regional forum for youth in Marrakech and the Arab SDGs forum in Kuwait.

Afaf strongly believes in utilizing the different media types as the key tool to educate communities, to provide a complete view of the current issues, and help to drive citizenship that is more effective. In addition to her PR and Journalism experience, Afaf has always been passionate about world issues and social development; therefore, she is determined to spread awareness and to motivate youth to join the positive change movement. She hopes to combine her passion for journalism with her entrepreneurial and cross-cultural skills in her professional career.

The official languages of the country are Amazigh and Arabic. Berbers – Represent the origins of the Algerian population- call themselves Imazighen, meaning noble or free-born. The Berbers are split into four main groups: Kabylies, Chaouias, M’zabites and Tuaregs. The largest of these are the Kabylies, who live in the Kabylia Mountains east of Algiers and speak the Kabylie language. The Chaouias live in the Aurès Mountains of eastern Algeria and speak Shawiya Amazigh. The M’zabites in the northern Sahara live around isolated desert oases and speak Tumzabat. Finally, the Tuaregs, a traditionally nomadic people, travel through neighbouring countries such as Mali, Niger, and Libya. They can be found in the Sahara desert in Algeria and speak Tuareg.

When reflecting about my life story, I can say that it was shaped since childhood; I had a remarkable mother and a father who raised me to be independent and taught me values to live by in my life. Along my career I met and worked with inspiring young change-makers in Algeria and abroad who offered chances of collaborations and a never-ending learning process. I strongly believe that living for a reason is a must to feel ALIVE! This is why I'm engaged in my community doing my best to contribute to the development process and to make a positive change. I must say that it’s a great privilege to be alive and have the possibility of helping somebody or making things a little bit better.

A: We begin developing our worldview as young children, first through interactions within our family, then in social settings such as school and community activities, and from our companions and life experiences. Increasingly, our media culture is playing a key role in shaping worldview. Each culture is saturated with powerful media images in movies, television, commercials and music. So, what we watch, listen to and read, impacts the way we think. Consistently consuming entertainment with false ideas will inevitably deform our view of the world.

The situation of our world today is not that promising (humanity speaking): Wars, Racism, political and religious conflicts, climate change, etc.) Jim White in his book "A Better World", said: "The dynamics for a creating A Better World include developing trust by treating all people with respect, and by creating an inclusive environment that acknowledges differences.”

A better world means being able to access jobs and income, environmental quality and a good social environment in the places where people live. In other words, is the ability to measure what matters to people lives and finding the gaps in order to better focus on improving current quality of life while ensuring a sustainable future.

A: I would say lack of employment, youth worrying about their future and not knowing ways to deal with stress, anxiety. Whilst to environmental issues, lack of respect from older generations, or mental health as the biggest challenges. Meanwhile, an overwhelming number of people pointed to technology as the biggest challenge, specifically how cell phones run and ruin our lives via social isolation, distraction, cyberbullying, and random relationships.

Social media has been both a blessing and a curse to our generation pushing us to live a – certain - lifestyle besides to the pressures of materialism and negative stereotypes.

A: First, was breaking negative stereotypes in community and professional world. Then when joining the professional world, I had to improve myself as a leader and a manager. Of course! There are creative women in leadership positions in Algeria who are doing amazing things and what makes us who we are today is what we decide to tell ourselves every day; we can choose between an internal narrative that will make us stop and one that will push us forward make us comfortable with the fear of failure.

A: A mentor can give me the benefit of his or her perspective and experience. He or she can help me assimilate to a new position and give me an insider’s view on how to get things done effectively. His/her primary mission is to provide guidance and support based on his /her unique developmental needs. He/she can be a life coach, a career advisor, a source of encouragement and support, a resource person and an idol!

A: Perseverance, not to give up on my dreams, keep pushing, moving on, no matter what happens. Despite facing life pressure and unexpected events, I learnt to always have commitment and a belief that tomorrow can be brighter than today. And the fruits of our hard work and sacrifice will pay off.

A: “THIS IS MY WAY” is a social initiative that aims to promote volunteer tourism. It is led by a group of young Algerian activists who contribute their time to raise money and work for causes and charity activities across the African continent. For more details about their initiative: https://www.youtube.com/watch?v=Y_39S1svgqc, https://www.youtube.com/watch?v=_1Gis9lMQ-s

A: One of the struggles that underlie all of our policy battles is the continued lack of women in positions of power, from corporate boardrooms to the courts and political leadership. I don’t think it’s possible to name just one challenge; from the economic instability to climate change to social reform to national security, all issues are women’s issues, but I believe a key to tackling the challenges we face is ensuring women are at the table, making decisions. Something I’ve seen over and over again in my own career in other countries is that women in power bring a different perspective, an essential perspective. The sooner we understand that the lack of women in leadership roles holds back not only women but all people, the sooner we will be able to advance society as a whole.

A: I would directly recommend Djamila Bouhired, she was a militant against the French colonialism and an idol for all the Algerian ladies. More details about her life: https://www.encyclopedia.com/women/encyclopedias-almanacs-transcripts-and-maps/bouhired-djamila- 1937

A: “Rule Number 1: Forget the rules and do what it takes”

A:  I have to admit that finding the right mentor was a hard mission for me. Therefore if you are lucky enough to find a good mentor, you are already halfway through success. From business perspective, I was able to pick up things faster because, from the very beginning, he kept giving me a lot of business knowledge. Also on a personal level on how to avoid routine and give time to myself and prioritize my inner peace. Having fun is equally important, so apart from work, he also kept suggesting to do research about favourite artists and summarize books that we read on our childhood. 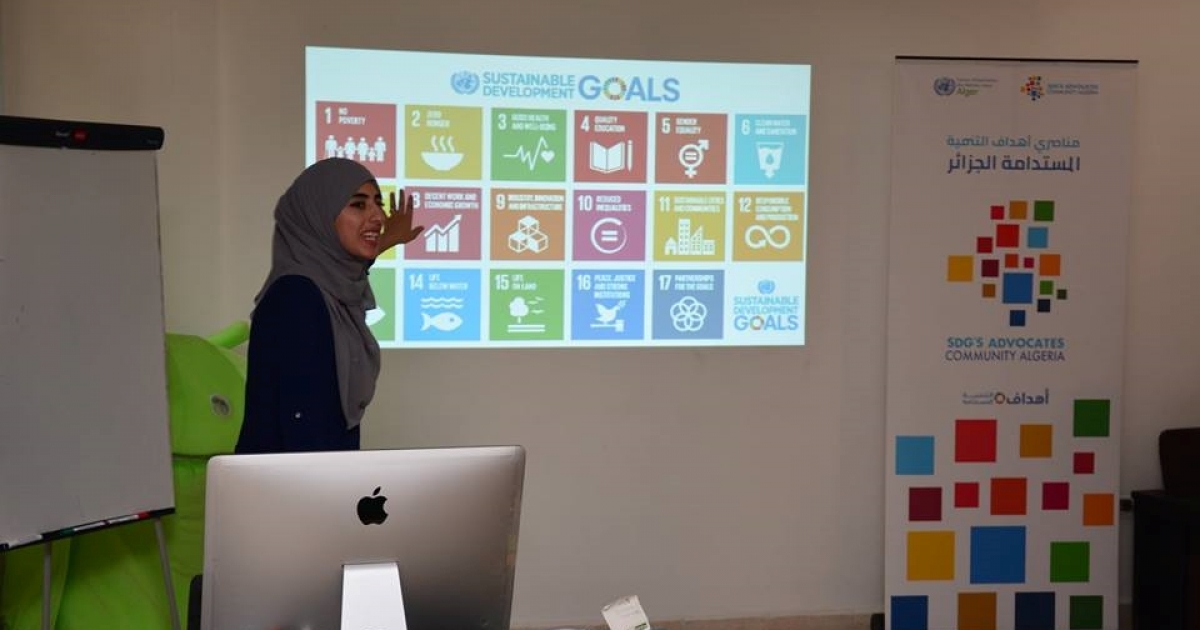