Engaging entrepreneurship in building a society of hope

Entrepreneurship is crucial in driving energy, innovation and opportunity into the economy. Empowering ethical entrepreneurship and inspiring an inclusive view of businesses is essential in long-term economic growth and global competitiveness. As we are currently faced with a deep crisis in values and leadership, we need to appreciate our place in the universe and encourage creative and global thinking to uplift the spirit of the world.

A commitment to innovation and entrepreneurship provides great hope for the future. It is essential to develop and inspire people everywhere to explore their inherent capabilities by capitalizing on their entrepreneurial talent. Entrepreneurs are the source of innovation and can help to solve social and environmental problems by creating successful enterprises. In this effort, it is crucial for business, communities, industry, government and citizens to come together to drive innovation and progress. By bridging differences and sharing knowledge, we can create the right framework for change.

Times of crisis can also become opportunities, spurring the search for the proper perspectives and ethics. When we know our values and our responsibilities as human beings on this planet, we can expand our potential. Searching for these ethics and values can help us to discover our inner strengths and assets, and with the right leadership qualities we can build momentum to expand these assets. 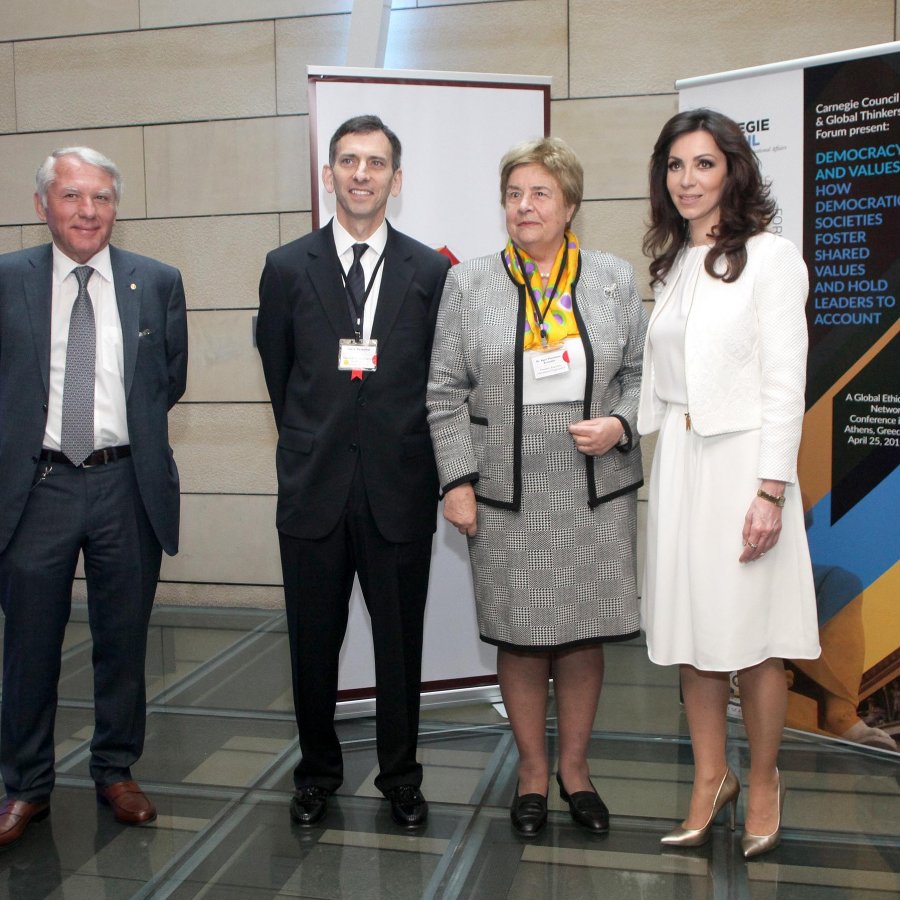 In our unprecedented drive for economic power, we have forgotten the value of a vision of hope and mutual understanding. On a cosmic scale, we know of no other planet in the universe where life exists. This makes it all the more urgent to elicit a global commitment to protect the continuity of bios – all forms of life. But on the microscopic level as well, the world of the cell unravels an infinite potential for humanity and consolidates the marvel of this unique gift. The revelations are dazzling; 650.000.000.000.000 molecules of hemoglobin are produced every second in the human body. We cannot grasp this measurement in a single lifetime, yet, besides hemoglobin, thousands of other proteins are produced by the millions in every cell, providing just a small example of what is taking place every fraction of a second in every living organism. Albeit, our arrogance is not allowing us to appreciate this miracle and we continue to be caught up in a dangerous web of environmental destruction and abuse.

In the face of these critical dangers, the need for thoughtful engagement in environmentally ethical decision-making has grown increasingly urgent. Because the burden of establishing ethical practices falls on all members of society, this need includes every human endeavor and entrepreneurship is key to meeting this challenge. Socially responsible entrepreneurship can be enriched by the harmony of life and become an inspirational force in the race to save the environment.

In an increasingly complex and rapidly changing world, innovation will be key to meeting the challenges ahead. Innovation in education, in the application of new knowledge, and in developing commercial enterprises and social service and civil society organizations can spur leaders to espouse change. Entrepreneurs with the education and skills to launch and develop new enterprises and to contribute to the growth and impact of existing companies and organizations will be important to the future of their communities and the world.

The development of ideas and the sharing of knowledge with a broad market requires the application of new dimensions in science and technology that will stimulate economic growth. The cooperation of techne and technology is vital in this context, as it is only through synergy among different fields that leading innovation can be achieved.

The “bio-assessment of technology,” which evaluates progress based on its contribution to the environment, promotes dialogue and cooperation through a thesis, antithesis and synthesis of new values. In serving society, it is essential for entrepreneurship to expand its impact by bringing great benefit from the new knowledge created.

In this context, bioculture can inspire us to deepen our culture of innovation and entrepreneurship through the application of new knowledge and the development of new entrepreneurial enterprises. By mobilizing an educational and cultural commitment, bioculture will encourage the next generation of entrepreneurs to bring benefit to society. Literature and the arts can be an enlightening force in this effort, supporting mutual enrichment and helping us to view our differences as a source of inspiration provided by bios.

To overcome the crisis in ethics and values, enlightened leadership is required in every sector. Strict regulations are not the answer. What is urgently needed is a vision that can infuse society with inspiration and hope. Biopolicy – policy with bios at the heart of decision-making – catalyzes tools and guidelines for the promotion of dynamic relations between the environment, society and policy and inspires people everywhere to take urgent and concerted action to mitigate climate change and save life on our planet.

Changes and reforms ought to be based on immediate action, having as a target the transformation of our global society. Enough with misery and hunger, lack of water and food, toxic pollution and wasting of valuable resources. We need to proceed with expedient plans for zero emission cities, clean energy, green jobs. The evaluation of technological progress with bios in mind can prevent Pandora’s Box from spreading destructive trends and can open up the pathway to amazing possibilities for the mobilization of every individual on our planet, thus enhancing entrepreneurship, creating millions of new jobs and moving forward with increased momentum and hope. Awareness of our interdependence and appreciation of diversity through “biodiplomacy” can lead to a healthy and happy existence. The body of humanity, part of the wondrous body of bios, if guided by enlightened leaders, can develop and prosper through a conscious commitment and pledge to secure the survival of our planet. Ethical and inspired entrepreneurship can speed up the needed action to safeguard the continuity of bios and enhance lives and livelihoods. This is the most profitable return on investment. 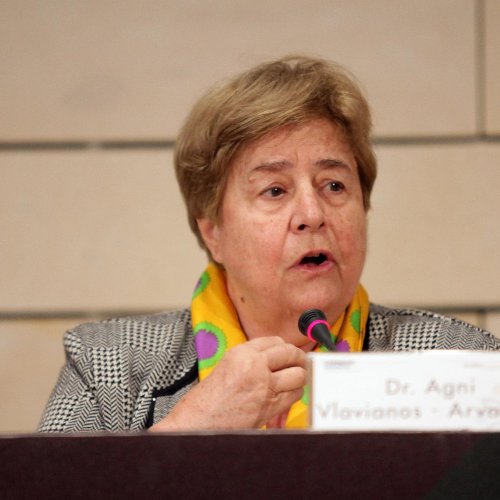 Professor Agni Vlavianos Arvanitis founded the Biopolitics InternationalOrganisation (B.I.O.) in Athens in 1985, to promote international cooperation and education for the environment. With Greece as its operating basis, B.I.O. has gained wide acclaim by scholars and decision-makers in 165 countries around the world, and has been granted special Consultative Status with the United Nations' Economic and Social Council (ECOSOC).

A graduate of Barnard College, New York University and the University of Athens, Prof. Vlavianos Arvanitis worked as a university teacher and researcher in the USA, Paris and Athens, and has organized numerous conferences and events. Acclaimed poet, her works have been translated in six languages. She is Fellow of the World Academy of Art & Science, member of the Vienna Economic Forum, Honorary Professor of St. Petersburg Technological University, Doctor Honoris Causa of Mendeleyev University Moscow, active member of The Club of Rome, Founder and President of the Hellenic Chapter of the Club of Rome, the Balkan Political Club, the Brussels-EU Chapter of the Club of Rome, the International Bioethics Society, the Board of the Euro-Arab Cooperation Center, the Board of the Journal of Cleaner Production, corresponding member of the Pontifical Academy for Life, international patron of Global Cooperation for a Better World, member of Transparency International and the National Society of Greek Writers, and Goodwill Ambassador for the Greek Society for the Protection of Autistic People.

She has received many distinctions some of which include: 2004 Biopolicy Award by the Royal Swedish Academy of Sciences; the election with M. Gorbachev, N. Mandela and M. Strong as Hon. President for Life by UNA Sri Lanka; Honorary Diploma by the Ukrainian Minister of Emergencies; AbdiIpekci Peace and Friendship Prize; Euro-Arab Co-operation Centre's Environmental Award; Peace Through Tourism Award by the World Association of Travel Agencies; Albert Schweitzer Gold Medal. 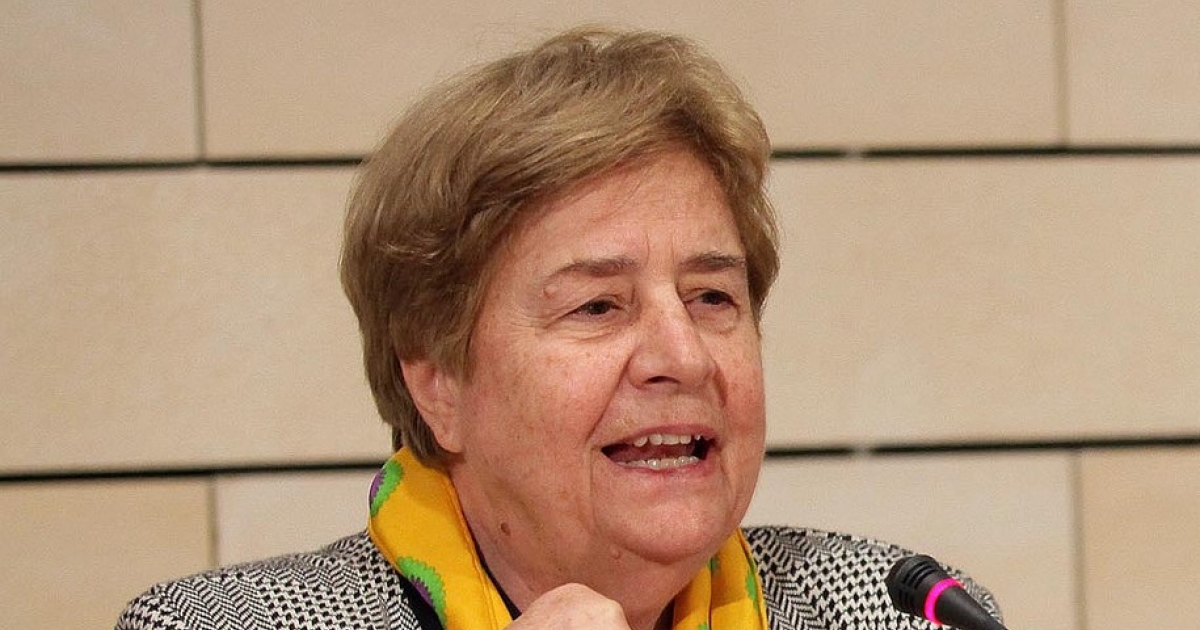