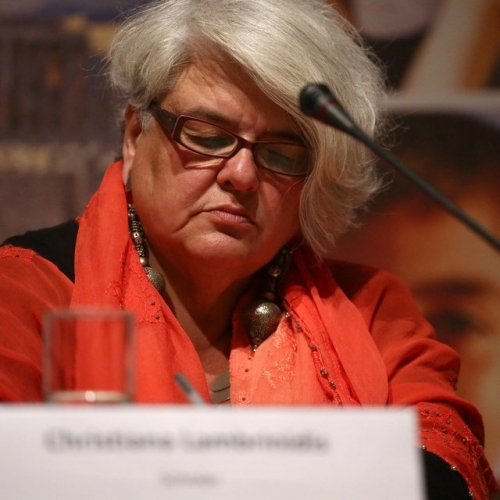 Christiana Lambrinidis is a thinker, scholar of creative writing, mentor, pedagogue, playwright, theatre director, lecturer, editor and activist. The Human Rights Watch awarded her with the Lillian Hellmann and Dashiel Hammett awards, and Lambrinidis was nominated twice for the Right to Livelihood Award for her international methodology of transforming violence to empowerment through intellect. From 1995 to 2013, she has mentored new writers to produce, singularly and collectively, a literary tradition of excellence that calls the reader to action.

Her method enables her students to collaborate at the forefront of current discourses in universities around the world. As a point of reference for budding academics, her methodology and its results are featured in PhD’s in Greece, the Unites States and the UK. Ms. Lambribidis founded the Center for Creative Writing and Theatre for Conflict Resolution as a functional paradigm of social action, culture and intellect. She introduced and established creative writing in Greece as an academic field, as an inspiration for literature, and as a praxis of intellectual democracy. Major projects include, Rifts in Silence: How Courage is Taught. This was the first decisive action between Greece, Turkey and Roma border populations which was performed at UN Headquarters in New York. Women of Tuzla, Serajevo and Mostar: A Mythography of Courage, was the performance of testimonies from the refugee camps of “ethnically cleansed” women in Bosnia Herzegovina during the war. This performance travelled not only to theatres in Athens, Galway, Thessalonik, Antwerp, but also refugee camps under the auspices of the UNHCFR. Lambrinidis was the first woman writer to hold the position of Writer-in-Residence at the George Seferis Chair for Modern Greek Studies, Harvard University. She devised the first comparative literary seminar on African-American and Greek women writers and used hellenism as a geopolitical vehicle to enable dialogue. She received her degrees from Wellesley College and Brown University.