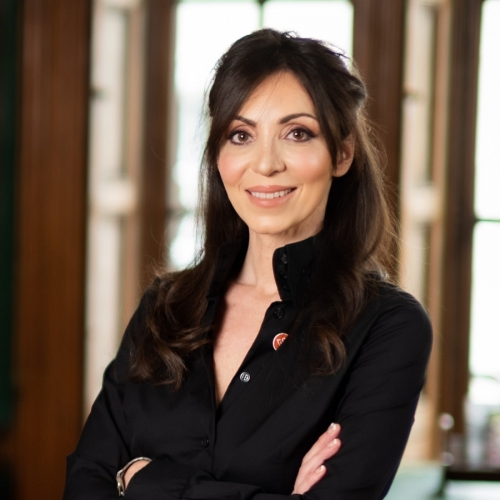 Elizabeth Filippouli is a journalist, author and executive. Her early career in print and broadcast journalism at Greek and international media was prelude to now over a decade of activism and serial entrepreneurship.

She is Founder and CEO of Global Thinkers Forum (GTF) since 2011. GTF is an independent civil society agency incubated at the University of Oxford, now London-based and working through a global network of thought leaders to promote values-based decision making and supporting women and youth through programmes and initiatives in MENA, Africa, Asia, Europe and the Americas.
In 2018 Elizabeth launched Athena40, a family of diverse initiatives that advance female leadership by creating opportunities for women to be recognized for their work and connecting them with peers from around the world.
Elizabeth serves on the Global Advisory Board of the Prince’s Trust International. She is often invited as speaker on visionary leadership and women's issues. She has read Strategy and Innovation at Oxford’s Said Business School, Transnational Media and Globalisation at London City University (MA), and is completing the MS on Philosophy, Science and Religion at the University of Edinburgh. Her first book ‘The Invisible Reality’ was published in Greece in 2004. In 2020 she co-authored together with Dr Marc J. Ventresca a work on ‘Kindness in Leadership in Times of Crisis’, the first of several publications that rethink the work of leaders.