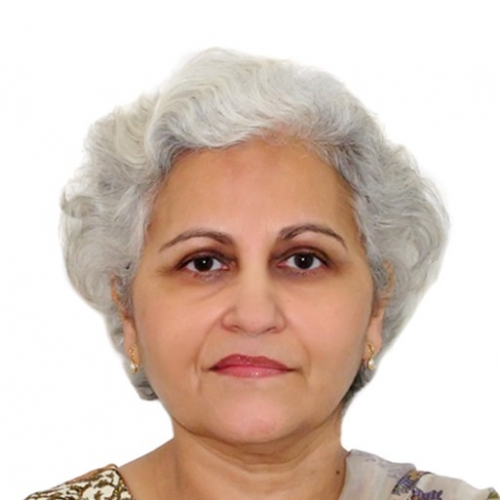 Attiya Mahmood has served as Ambassador for Pakistan to the Kingdom of Morocco, Hashemite Kingdom of Jordan and the Republic of Indonesia, in addition to serving in various other capacities for over 35 years in the Foreign Service of Pakistan.

Most significantly, during her tenure in Jordan from 2010-13, she witnessed the transformative events unfolding in the region. During her stints at the headquarters in Islamabad, she was involved with drawing and implementing an Africa Programme; providing diplomatic, economic, agricultural and educational training to nominees from African countries as part of Pakistan’s outreach towards the African Continent.

She also headed and established the first Human Rights desk at the Ministry of Foreign Affairs, during which time she participated in the HR’s Council meetings in Geneva and UNGA sessions in New York. Also as Head of the Americas Division in the Ministry, she overlooked bilateral relations with the US, Canada and the whole of Latin America, and travelled to the region. Notably, she represented the Ministry in the Pakistan-US Strategic Dialogue meetings held in Washington and Islamabad during 2008-10, a challenging period in Pakistan-US bilateral relations.

Besides being a Non-Executive Director and a Mentor for the GTF, she also worked briefly for the Ahmed E. H. Jaffer Foundation, a Not-For-Profit organization in Karachi as its Chief Operating Officer, following her retirement. She also serves on the Executive Board of All Pakistan Music Conference (APMC) Karachi, which works for the promotion and preservation of classical music. She is on the Advisory Board of “Joy of Urdu”, an Urdu reading group and a member of the English Speaking Union in Karachi. She is also a voluntary member of an advocacy group “Kasur Hamara Hai” (KHH) constituted in 2018 working for legislation on creating a Missing Child Alert System. She has also qualified as a Certified Director from the Chartered Accountants Institute of Pakistan. In addition, she also speaks on various think tanks in Karachi on topics of interest.